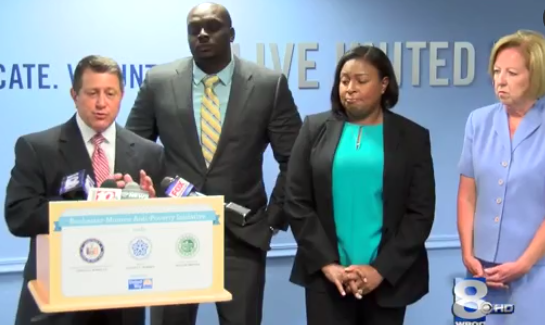 The Rochester Monroe Anti-Poverty Initiative was founded in late 2015, with the goal of reducing poverty by half in 15 years. The state ponied up a half million dollars to get the entity going.

1. RMAPI is not accountable to any local elected officials or single government body.

2. RMAPI has issues with transparency.

3. RMAPI is struggling to communicate its purpose and work.

4. RMAPI is an effort more than an entity.

According to representatives who appeared on Connections with Evan Dawson on WXXI in July, “RMAPI is an operating philosophy…It’s made up of several organizations…We are a collection of agencies and individuals from those agencies trying to get everyone focused in the same direction of how do we tackle this most serious problem.”

The officials said RMAPI is not a 501(c)3 charitable organization. RMAPI doesn’t administer funds or run programs. RMAPI doesn’t have a bank account. RMAPI does “influence the distribution of money.”

To hear them talk, RMAPI exists in the cloud.

RMAPI was the brainchild of Assemblyman Joe Morelle, who secured crucial state funding to get it off the ground. Morelle teamed up with his longtime associate, United Way CEO Fran Weisberg, to launch the effort. Then-Monroe County Executive Maggie Brooks signed on. Mayor Lovely Warren agreed to support the effort, but only after she won the appointment of Executive Director Leonard Brock.

At the 2015 press conference announcing RMAPI, Morelle, Weisberg, Brooks and Warren could not answer questions about the funding stream, timeline or organization structure. The only plan of action appeared to be to house RMAPI at the United Way.

State grant money goes directly to the United Way, according to funding documents obtained through open records requests with the state. The first $500,000 arrived in April 2016. A $2.75 million grant was recently finalized and runs through 2019. The contracts are with the United Way, not RMAPI.

Brock and Weisberg take issue with any suggestion RMAPI is a entity of the United Way.

“They are an independent entity away from the United Way,” said Weisberg. “We are not the parent anymore.”

A restructuring of RMAPI was completed in June, with help from outside contractor FSG. The end result was that RMAPI had a new governance structure.

Weisberg said RMAPI went from a United Way program to a “community effort.”

“The real promise of RMAPI is that the poverty reduction strategies deployed by these often-siloed sectors can be coordinated and measured at a single table,” RMAPI officials wrote in a grant application to the state.

That single table is really big.

There’s a Steering Committee, made up of 46 members, including Weisberg, that will provide strategic oversight and guidance, and champion the effort in the community. It meets bi-monthly. There’s an Executive Committee made up of two co-chairs and seven members, which oversees day-to-day operations.

There are also four working groups and two councils, including one made up of people impacted by poverty who will provide feedback.

RMAPI is functioning like a nonprofit with a board. The steering and executive committees are co-chaired by Nazareth College President Daan Braveman and Rev. Marvin McMickle. RMAPI has produced an operating plan that will be turned into bylaws.

The Steering and Executive committees evaluate Brock’s performance and have the power to fire him, according to Brock and Weisberg.

While Warren has partnered with RMAPI on several projects, she doesn’t appear interested in monitoring the group’s finances. The City of Rochester said it had no RMAPI budgetary information in response to an open records request. Ditto for Dinolfo. Monroe County hasn’t responded to a request filed months ago.

The United Way has to provide progress reports to the state to fulfill grant requirements. But there is no single government agency — certainly none in Rochester — overseeing this effort.

The RMAPI website does not have any information about board meetings, including dates, agendas and meeting minutes. There is no published list of who’s on the steering and executive committees. There is no annual budget.

Because they’re not government entities, RMAPI and the United Way are not required to respond to open records requests or post any information about their ongoing activities online.

An email sent to Braveman, McMickle and Brock asking for bylaws and the names of people on the steering and executive committees got this response from Rev. McMickle, who appears to have accidentally hit “reply all:”

“What is the basis for her request? Why do we need to share this information with a private citizen? Is she writing a news article? If so, are we obligated to contribute to it? I don’t like the demanding tone of her request. “

Brock quickly followed up with the information and arranged a phone call to discuss RMAPI’s progress and governance. By law, he didn’t have to.

To date, RMAPI has received $3.25 million in state funding. RMAPI has also secured $6.25 million for related projects on childcare, nurse-family partnership, summer learning and adult mentoring. Some of these projects will be administered directly by the United Way. This information is on a fact sheet posted to the RMAPI website.

RMAPI has released a line-item budget for its first $500,000. The spending was mostly on personnel. The grant application for the $2.75 million accounts for six staffers and operations. But it leaves $2 million in spending to be determined. Brock said his team is still working on a plan for those dollars.

We remain in the dark about private funds awarded to RMAPI. The 2016 Year in Review lists $12.6 million in state and private grants for which RMAPI is the “coordinator.” There is no source of funds listed. The FSG contract was paid for with dollars from a foundation, according to Weisberg. RMAPI announced a partnership with Clear Impact and a “rebranding” effort. Those contracts are likely privately funded, as they’re not detailed in any grant documents. We may never get a full accounting of RMAPI-related spending.

RMAPI is based on collective action, getting everyone on the same page and getting complex systems to work together.

RMAPI has done a great job getting the community talking about poverty and understanding the importance of solving this problem. RMAPI is leading discussions on trauma and structural racism, helping us recognize and mitigate the impacts. Hundreds of families and individuals will be helped by funding secured by RMAPI. The entity has formed important partnerships with the city and local employers. It’s clear RMAPI has tremendous potential to impact poverty.

There are, however, some red flags.

– Governance: The governance structure seems overly large and complicated. But it’s new, and should be given time to produce results.

– Approach: “We can’t program our way out of poverty,” Brock said on WXXI. But programming appears to be RMAPI’s main focus. At times, RMAPI seems like an anti-poverty lobbying group. We haven’t seen out-of-the-box thinking on policies and transformative ideas.

– Accountability and Transparency: The city or county should take over the effort to provide oversight and ensure public access.

It remains hard to define RMAPI. There’s a lot of skepticism and misperceptions. Brock acknowledged RMAPI is having trouble telling its story to the community.

RMAPI could start to mitigate all of these issues and realize its potential by taking one giant step — down from the cloud.