– Alexander was paid to speak at a Florida conference, but put down time as regular work hours.

– Alexander did work for a government contractor that previously engaged in torture.

Deputy Mayor Cedric Alexander’s executive assistant has been booking his personal travel as part of her regular job duties.

In late February, Rochester for All filed an open records request for all email correspondence about Alexander’s travel arrangements. The city has not provided the documents. However, Rochester for All obtained the material through a source.

Jackson has worked with Alexander’s former secretary in Georgia on his schedule. She obtained his frequent flier miles for use in booking flights. In one email, she asked a conference organizer if Alexander would be selling the book he authored at the event. In another email, she told a travel agent, “Thank you…for your assistance over the past 7 months. I will be referring Dr. Alexander to you for all of his future personal travel.”

During an appearance on WHAM1180 earlier this year, Alexander said the “DOJ sent him to South Africa.” That’s misleading, as the emails indicate government defense contractor Engility arranged the September trip to train police forces. Engility paid a multi-million dollar settlement for its role in the Abu Ghraib torture scandal.

Alexander used vacation time for the week-long trip. Yet Alexander forwarded the itinerary to Jackson and said, “Please make hard copy and keep record for yourself.”

Jackson helped to arrange Alexander’s travel for a meeting at CNA in Washington, D.C. in May. Alexander did not put in any work hours for the trip on his time card, so it was personal business.

Our previous reports show Alexander was absent from City Hall for 28 days in his first 25 weeks on the job. The travel records raised potential ethical issues regarding Alexander’s outside business activities and whether taxpayers should foot the bill.

The emails also confirm that Alexander received a benefit from his speech at Axon/Taser. The company paid for his travel expenses. This is a violation of the city ethics policy, which a the time forbade gifts of $25. Axon/Taser is a city contractor.

The email records also solve a mystery about why Alexander changed his time cards last fall, three days after Rochester for All requested his schedule. Alexander was a featured speaker at the CIT International Conference in Florida in August. He marked down on his time card three full work days for his time at the conference.  But the emails show he was paid a $1,000 honorarium to speak. Alexander changed his time card to vacation time, even though he hadn’t accrued the days per city benefits policy covering senior managers. The records now make it clear that Alexander attempted to collect from both taxpayers and the conference organizers on a trip that was clearly personal business.

In one email exchange, Jackson asks the American Psychological Association if it would pay for Alexander’s expenses to the conference. The APA agreed to cover the hotel room, only. That didn’t deter Alexander from using taxpayer dollars to cover the rest of the trip, including his flight.

Sadly, we know the city will not investigate this matter. The mayor, City Council, Office of Public Integrity and Board of Ethics have not acted on information we’ve already reported. City residents need an outside agency to investigate Alexander’s flagrant abuse of taxpayer dollars, which include theft of vacation days, altering records and using his secretary for personal business. 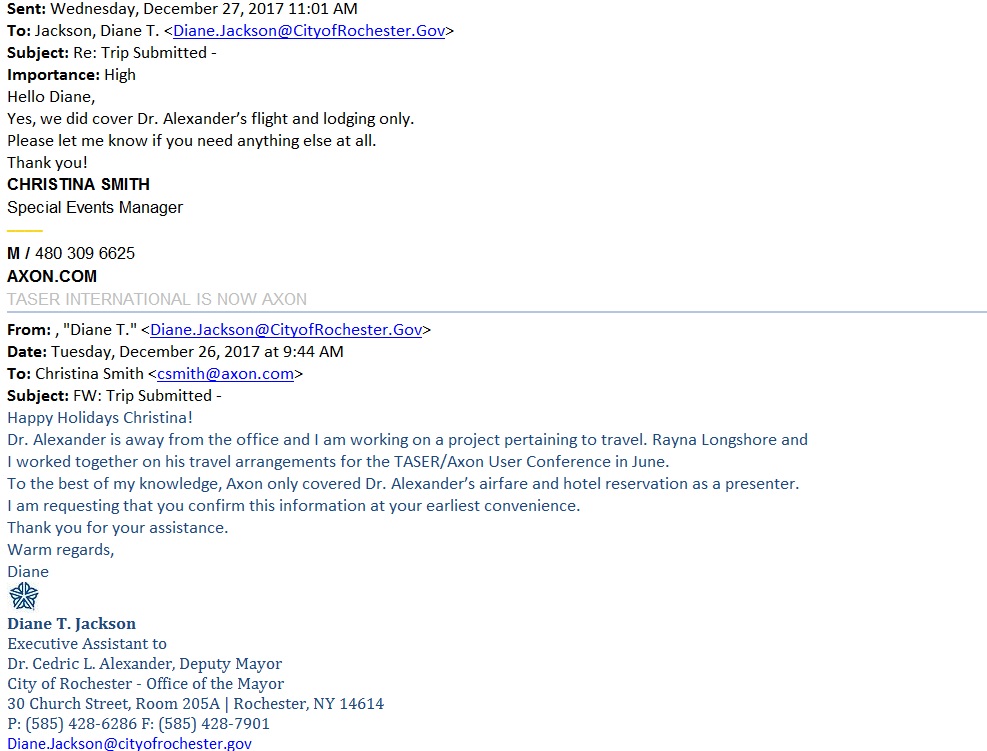