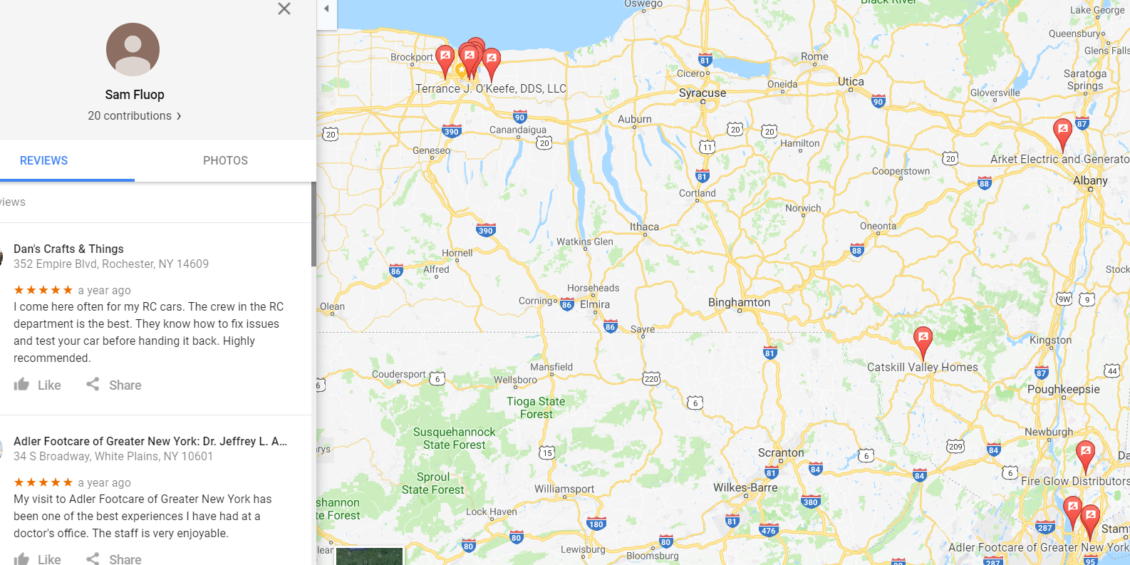 CGI Communications may be writing fake reviews for its clients – and itself. The Rochester-based company offers online reputation management and search engine optimization services. Rochester for All spoke with former employees who say they were directed to engage in this activity. We also found suspicious review patterns among CGI clients.

Rochester for All recently questioned whether CGI should receive a $1.5 million state grant.  CGI is a privately-held company with about 300 workers. The $1.5 million grant is going toward an expansion of the firm’s downtown Rochester office.

Rochester for All looked further into allegations of fake reviews. We talked to several additional former workers who added their experiences. None would allow us to use their names because they maintain relationships with former colleagues. They also said their current bosses would disapprove.

CGI offers to help clients get more business by improving their online presence. Customers may be more likely to choose firms that show up high in Google rankings and have positive reviews.

The CGI division that offers reputation management  is Next! Ad Agency. One of the products is a hotline for a firm’s customers to leave positive reviews. “When you enroll in our Review Hotline program, you are provided with a local phone number which allows your customers to write or record reviews directly from their mobile devices. Your clients have the choice to leave a review on Google, Yelp, or record a video review,” the CGI website reads.

CGI workers often cold call businesses to sell these services, along with website and video production.

Donna on Twitter wrote, “Our biz was solicited by these folks. First thing discussed was how they could get us 5* reviews! I asked how, and they said they have their ways.”

A man worked at CGI for most of 2017 said he didn’t realize reviews were being manufactured until he checked up on a customer.

“I had a client who had a 1.5-star rating on Google. I sold him on the fact that we can get you up to 4-star to get you more credibility. He’s an auto dealer. I look two months later and he’s a got a couple reviews. They’re generic,” the former worker said. He suspected they were faked. “I went down to talk to the account manager. The kid said to me he has five different Google accounts he posts on every day and it’s tough for him to post. They had a quota.’

The former worker said many employees had Mi-Fi devices, which had IP addresses that wouldn’t trace back to CGI.

One former employee who worked at CGI between 2008 and 2012 said he was instructed to ask clients for names and numbers of their best customers. He would call the customers and transcribe a verbal review. He would then post the review on websites.

“We had to create dozens of fake e-mail accounts to try to post these fake reviews and if we couldn’t contact the people the business suggested, we’d make reviews up and post them. Executives and leadership did not care what you were doing as long as you got the job done,” the man said.

On the Better Business Bureau website, a company complained a CGI staffer gave it a one-star rating on Google because it refused to sign up as a customer. CGI responded on the BBB website that it disciplined the employee and used the incident as a teachable moment. In another case, a customer accused CGI of writing fake positive reviews about his company, which CGI denied.

Writing fake reviews even extended to lauding their own company, another former CGI worker said. She worked at CGI in 2013 and 2014. “One day we were all working away when our supervisor came in. She said someone had just posted a negative review on Glassdoor and that we all needed to get onto Glassdoor right away and start leaving multiple positive reviews. She offered $20 to the person who wrote the most reviews.”

Lu Engineers has eight Google reviews, all posted about a year ago. Lu Engineers is a CGI client, and the reviews raise red flags. Of the eight reviewers, seven posted reviews to the same companies. The seven reviewers used services all over the state, and in some cases, multiple states.

What are the odds customers who took time to review Lu Engineers on Google also patronize a dance company in White Plains, a pizza joint in Sleepy Hollow and a jeweler in Schenectady? Apparently, they also share the same accountant and payroll processor.

CGI General Counsel Pete Peterson said the company does not engage in fake reviews, and referred us to the Next! Ad Agency website for more insight on their services. He added:

CGI has long been on the cutting edge of digital marketing and web services for its tens of thousands of small business clients across the nation.  Part of the process of devising new systems and technologies for our company and its clients involves trial and error, an evaluation of risks and benefits, and taking chances.  We learn, we implement, we change, we succeed.

As with any business, our road to success has been one of dips, curves, and occasional potholes.  Yet this road has brought us very, very far. We have organically grown from a very small group of people selling cartoon maps into a company with about 300 employees selling digital products and services.  CGI is evolving.  Who we are and what we do changes each and every day, for the better.

We are proud of our accomplishments and the substantive value we have brought our many satisfied clients, our tremendous employees and their families, and to downtown Rochester.

Peterson said CGI has never gotten in trouble with Google, Yelp or the Attorney General.

The man who worked at CGI in 2017 said he left the company because he felt he was engaging in unethical business practices. He said businesses receiving fake reviews are victims. “(Bartosiewicz) gives people a false sense of relief with reviews,” he said.