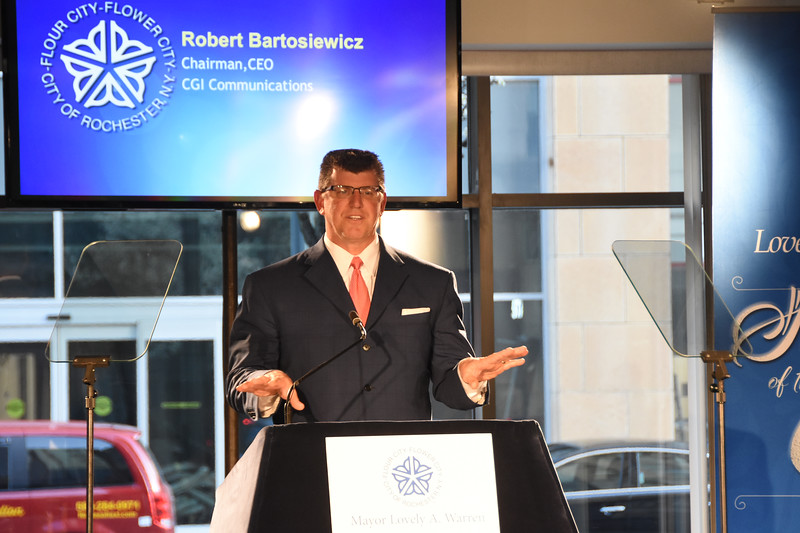 New York State is giving a $1.5 million state grant to a company whose CEO has been accused of violent behavior, fostering a “work hard, play hard” workplace, engaging in questionable business practices and underpaying employees.

CGI is a privately-held company with a headquarters on East Main Street. Founded in 1987, it employs about 300 people. The company creates websites and promotional videos, and offers search engine optimization and social media management services. It counts as many of its clients municipalities and business associations.

Rochester for All contacted CGI by phone and email several days ago, but we have not received a response. If we receive any response or corrections, we will provide the information in this post.

CGI is in the midst of expanding its downtown footprint. CEO Robert Bartosiewicz told the Democrat and Chronicle in February 2017, “We’re doing this all on our own dime.” Yet in December 2017, the Finger Lakes Regional Economic Development Council awarded CGI $1.5 million for the project.

CGI has enjoyed a number of grants and tax incentives over the years. The company received a $2.1 million loan from the City of Rochester under the Robert Duffy administration. CGI has also received assistance from COMIDA.

Bartosiewicz donated a combined $8,000 to Warren’s campaign and political action committee individually and through his company. Warren held her 2017 State of the City Address at the CGI complex downtown. CGI sponsored the city’s Party in the Park concert series.

CGI typically contracts with a municipality or business association to produce free online promotional videos. CGI gets revenue by selling sponsorships of the videos. CGI has hundreds of satisfied clients all over the country and is endorsed by the U.S. Conference of Mayors and the National League of Cities.

However, CGI Communications has a number of complaints regarding aggressive sales tactics, misrepresentation, overcharging and taking business away from local vendors.

A North Carolina mayor who believed local businesses didn’t realize their ad dollars were going to an out-of-state firm likened CGI’s services to a “city-authorized scam.”

Another North Carolina town rejected CGI’s offer, citing complaints on the Better Business Bureau website. The board of commissioners worried about price-gouging and a negative impact on local videographers.

The BBB website includes 29 reviews of CGI, of which 17 are complaints. In some cases, CGI provided full refunds. In other cases, CGI referred customers to contracts they signed.

In one case detailed on the BBB website, after a business said no to a sales pitch, a CGI employee gave the business a one-star rating on Google. CGI responded on the BBB website that it disciplined the employee and used the incident as a teachable moment. In another case, a customer accused CGI of writing fake positive reviews about his company, which CGI denied.

Local videographers have complained in several cities when deals are inked with CGI. CGI has been accused of underpaying subcontractors. A Connecticut marketing company claims CGI was charging small businesses far more than appropriate for the services rendered. CGI claims it offered lower-priced packages.

A Napa business owner claimed she paid CGI $2,000 for a video ad, but the company never produced anything. The woman later got a refund.

A Florida business claimed a CGI salesman said he was with the mayor’s office and offered discounts if he could use their boat.

Five women sued CGI in 2014 for not paying them overtime. The women said they had to write scripts in a “fill in the blank” and “Mad Libs” style for clients. They claim they earned annual salaries of $25,000 and were forced to work unpaid overtime. The women said sometimes they were allowed to leave work early “on the condition that they go to a bar with members of the management and/or executive team.” In court papers, CGI denied the allegations.

John Rand, who was Bartosiewicz’s executive assistant, filed a federal lawsuit against Bartosiewicz claiming the CEO assaulted him. In court papers, Rand said the incident happened in 2012 at a Super Bowl party in Indianapolis featuring celebrities and Playboy Playmates. Rand said he asked Bartosiewicz to step out of the frame for a group picture, and in response, the CEO kneed him in the right thigh. Rand claimed he suffered an injury that required a full knee replacement. In court papers, Bartosiewicz denied the allegations. Both sides agreed to end the case for undisclosed terms. When we reached him by phone, Rand said he’s not allowed to discuss the matter. Bartosiewicz’s insurance company sued him over the incident, saying their policy doesn’t cover liability associated with assault.

In 2011, Bartosiewicz was arrested for arguing with patrons at a downtown Rochester bar and refusing to leave. We don’t know how the case was adjudicated.

Around 2009, the co-owner of the now-closed Matthews East End Grill contacted police when Bartosiewicz and another man got into a fist fight. “They were rolling around on the floor,” said Carl Falk. Officers gave Bartosiewicz a warning, Falk said.

“The holiday parties would get kind of out of hand. (Bartosiewicz) would randomly walk up to you and kiss you and hug you,” said a woman who worked at CGI from 2013 to 2016. She saw women coworkers sit on his lap.

“At our Christmas party, I’m sitting by the bar. (The CEO) comes up to me and screams in my ear, ‘Are you having fun?’ and kissed me on the corner of my mouth,” said a woman who worked at CGI in 2011 when she was in her early 20s. Another time, the woman said she was in the elevator. “(Bartosiewicz) gets into the elevator and he puts his hands on my hips and walks me back into the elevator.”

A woman on Twitter posted, “if we sat on the CEO’s lap at the Christmas party we got a day off.”

Eight of the former CGI workers with whom we spoke didn’t want to be named. Some work in sales and worried about what clients would think. Some said their current bosses would disapprove. Some worried about upsetting former coworkers who still work at CGI. Many pointed out that Rochester can feel like a small town, and speaking against a powerful individual could impact their careers.

A man who worked at the company in 2015 said Bartosiewicz was giving a tour when he stopped to ask a woman employee for a kiss. The woman complied. “That was really creepy,” the man said.

“I liked being with my friends on a yacht drinking during the work week,” the man said.

A woman who worked at CGI in the mid 2000s said a vice-president “grinded” her while intoxicated at a bar. Later, she was invited on a company cruise in the Bahamas. She said spouses were not allowed on the trip. Bartosowiecz joined the group.

“It was a free-for-all of inappropriateness,” the woman said.

Nearly a year later, Bartosiewicz suddenly fired her. She said it happened in front of other people. “I’m letting you go. You’re out of here,” Bartosiewiecz allegedly said. The woman said she had never been told of any problems with her performance. She said another company executive tried to intervene, to no avail.

“It was highly unprofessional and distasteful, to just fire me in front of people in a hallway,” the woman said.

“You constantly felt that any day could be your last day,” the man said.

Rochester for All talked to someone who was in the meeting and verified Bartosiewicz’s behavior, except that he didn’t remember the CEO throwing the coffee mug.

“He has these Monday morning meetings where he screams at everyone…Some of the Monday mornings, I felt incredibly offended. There was a meeting that prompted someone to quit, she was so offended,” said the woman who worked at CGI from 2013 to 2016. She added, “There are a lot great people working there.”

“I went to bed every night shaking that I had to go back there the next day,” said a former employee.

Rochester for All calls on local and state governments to review their relationships with CGI Communications. The behavior of the CEO and concerns of former employees and customers should lead to some soul-searching among government officials. There is enough that is part of the public record that warrants concern.