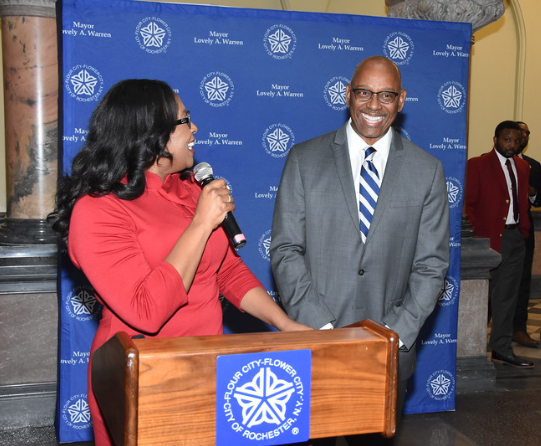 Deputy Mayor Cedric Alexander’s official schedule raises serious questions about conflicts of interests and time away from City Hall. Alexander is absent the equivalent of one day a week. The majority of his travel is unrelated to official city business.

Rochester for All filed open records requests for Alexander’s schedule and travel. During the 25-week period for which we have full records, Alexander was not at his office for 28 business days. Seven of those days appear to be on official city business, as the city paid expenses.

The deputy mayor oversees eight departments, which is an enormous responsibility. It’s hard to see how Alexander is adequately performing his duties.

There is some publicly available information about Alexander’s outside activities.

Alexander is listed as a clinical professor of psychiatry at the University of Rochester Medical Center. (City spokeman James Smith told 13WHAM News Alexander is unpaid, but he could be getting other benefits.)

Alexander is an analyst for CNN. He appears on their broadcasts and writes columns for the CNN website. (Smith told 13WHAM News Alexander is unpaid. That doesn’t mean he’s not getting other benefits.)

Alexander was on the Task Force on 21st Century Policing, created by President Barack Obama. The task force has ended, and the COPS office at Department of Justice is continuing its work on community policing. Meantime, Alexander is among members of the task force cashing in on the “21st Century Policing” brand. Some have ties to International Association of Police Chiefs and the National Organization of Black Law Enforcement Executives.

Alexander has already violated Rochester’s Code of Ethics. Per the code, Alexander is not allowed to have a business relationship or engage in any professional activity with a company that could impair his judgment or ability to do his job.

There are conflicts inherent in Alexander’s outside employment.

Any discussions about Alexander’s conflicts of interest must acknowledge that he is deeply involved in law enforcement.  Alexander does not oversee the Rochester Police Department, but his schedule indicates otherwise. He takes many meetings regarding the RPD, maintains membership in professional organizations, gets paid to consult on policing matters, attends conferences related to policing and gives interviews exclusively on policing

Alexander’s role makes his relationship with Axon/Taser troubling. Alexander was a featured speaker at the Taser/Axon User conference in June. Rochester purchases equipment from the company. On August 9, Alexander’s calendar shows an hour-and-a-half meeting with Vince Valentine, a National Sales Director for Axon. Since July 2016, the city has spent more than $80,000 on Axon products.

It’s unlikely that Alexander was not compensated in any way for his appearance at the Taser conference. Axon held a cocktail hour for Alexander at the event, where he was able to promote his book. An Axon request for speakers at its 2018 conference says they can get free admission, worth $629. (Smith told 13WHAM News Alexander was not paid to speak, but he did receive a cocktail hour and opportunity to promote his book, as noted. We need full disclosure to know if Alexander received any other benefits, such as meal or travel. Smith didn’t address Alexander’s subsequent meeting with Taser.)

Tasers have been the subject of lawsuits nationwide and in the Rochester area. In 2015, a Rochester man died after being tasered. When Alexander was Public Safety Director in Dekalb County, Georgia, a man climbing a wall fell and died after being tasered. Hundreds of deaths have been linked to Tasers. An Associated Press investigation discovered the company has been cultivating financial relationships with police officials, through travel, speaking engagements and consulting contracts. We must have public officials who can be trusted to independently assess the purchase and deployment of Tasers, as well as other equipment sold by Axon.

Alexander may be doing some of his outside work related to law enforcement on city time. His schedule had five conference calls coded “COPS A21CP Initiative: Site Team Update calls ( COPS, SSCs, OAs, CNA, IACP).” These calls occurred in the run-up to a trip to South Africa where social media posts indicate he spoke on “Policing in the 21st Century.” On social media and in an interview, Alexander said he was in South Africa to train police chiefs. Alexander should disclose the financial arrangements for this trip.

Alexander’s August trip to Atlanta and Washington, D.C. is concerning. Alexander previously announced the purpose of the trip was to learn how to improve security at public events. Alexander’s schedule for the Atlanta trip, taken from a Friday to a Tuesday, showed he attended the National Organization of Black Law Enforcement Conference. There are no meetings with Atlanta police officials on the calendar, though it’s possible they occurred. From Atlanta, Alexander flew to Washington for the American Psychological Association conference. Did Alexander use event security as a pretense for getting the city to pay for a trip that otherwise had dubious public benefit?

In addition to the National Organization of Black Law Enforcement Executives conference, the city paid for Alexander to attend the International Association of Police Chiefs conference in Philadelphia in late October. Alexander has business relationships with members of these groups. What is the real purpose of these trips?

Alexander’s relationship with URMC is also an ethical issue. The city has numerous financial ties to the institution. For example, the city has partnered with the University of Rochester on several projects, including giving a $20 million loan to College Town’s developers and providing millions of dollars for infrastructure for the project.

Alexander had separate meetings with U of R President Joel Seligman and Vice-President Peter Robinson. He attended a garden party hosted by Seligman, and gave a speech at URMC. What hat is Alexander wearing during these discussions? Alexander’s ties to the U of R mean ethical conflicts are inescapable.

It appears Alexander is doing URMC work on city time, as he had four separate meetings with doctors in the psychiatry department. It’s unclear why the city funded his trip to the American Psychological Association conference, as this expenditure seems to benefit Alexander and URMC far more than city taxpayers.

Alexander’s paid speaking engagements came under scrutiny at his last job. The Dekalb County Board of Ethics ruled Alexander could not discuss his current position and appear before contractors and any group getting a benefit from the county.

The Rochester City Charter required Alexander to disclose these arrangements to his immediate supervisor – Mayor Lovely Warren. If Warren believed there was a reasonable question of conflict of interest, she was obligated to seek an opinion from the Board the Ethics. The agendas and minutes show no request was made.

Rochester for All is filing a complaint with the Board of Ethics regarding Alexander’s activities. The board should issue an advisory opinion on Alexander’s outside employment. Citizens don’t have standing to bring complaints to the board, but there’s nothing stopping the board from taking up this important matter. Alexander should also immediately and publicly disclose all income.

Rochester for All also has a pending ethics complaint regarding the city’s purchase of 100 copies of Alexander’s book.

Rochester for All has raised questions based on publicly available information and open records requests. It’s possible there are legitimate and reasonable explanations for some of our questions. But it’s likely there are major ethical problems regarding Alexander’s employment. That’s why we need a robust investigation and substantial policies guiding such situations in the future.

(This has been updated to reflect City Hall’s response to Alexander’s positions at U of R and CNN, and his relationship with Axon.)