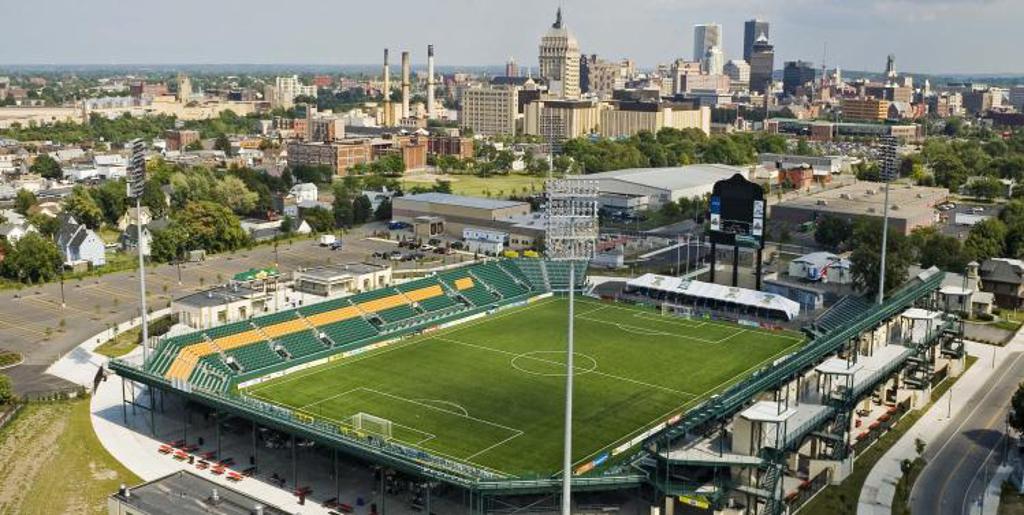 The Rochester Rhinos had been pushing for a new stadium to join Major League Soccer. The team packed Frontier Field on game nights. Rochester was Soccer Town USA. The time to strike was now, while soccer was hot.

Nozzolio and Johnson agreed to support each other’s projects, but Johnson insisted the taxpayer-funded soccer stadium be located in the city. Assemblyman David Gantt agreed to help Johnson on both fronts. There weren’t many great locations. The city chose a parcel in a distressed neighborhood off Lyell Ave., within eyesight of Frontier Field.

The stadium opened in 2006 and never captured the glory days of Frontier Field. Attendance this season was barely above 2,000 per game. The latest team owners, Wendy and David Dworkin, lost $1.5 million last year.

Some blame the location, fan experience at the stadium, on-field product, marketing and saturation of pro-sports teams. Whatever the reason for the decline, the Rhinos won’t be playing next season if the Dworkins can’t raise $1.3 million by the end of the month.

Here’s your news flash: #Rhinos need to make a decision by Nov. 30 whether they’re going to play the 2018 season. Aggressively hoping for “2500 new season-ticket holder‘s by that deadline.” My opinion: Good luck

The Rhinos would like a piece of Monroe County’s 6 percent hotel room occupancy tax. The 2018 county budget divvies up the tax this way:

The city uses its portion of the hotel tax on the War Memorial ($905,000) and Convention Center ($785,000). But the hotel tax doesn’t cover the cost of running those facilities. Consider the city’s subsidy of the following facilities, some of which need major infrastructure work.

(The list of subsidies should make it clear that no publicly-owned mega-facility is going to be self-sustaining. That’s not a bad thing, if the facility provides a commensurate benefit.)

The soccer stadiums subsidy includes heat, lights and power, insurance, water, refuse and various maintenance activities. Let’s be clear: Rhinos are already getting a big subsidy from the city.

City taxpayers shouldn’t exclusively shoulder the burden of saving the team. Any portion of the hotel tax that goes to the team would ideally come out of the county’s share. But that would necessarily take from other facilities and agencies.

There are questions about whether this last-minute effort would be enough to get the Rhinos on solid ground. The franchise has been losing substantial amounts of money for years. If they leave, the city would be stuck owning a stadium without a major tenant. But the city is already footing the bill, and the facility would surely still be used for high school and musical events.

The community has a big question. How badly do we want professional soccer? We’ve said goodbye to the Flash. Are we prepared to say goodbye to the Rhinos? The deal cut in the early 2000s had greater consequences than a failed ferry and struggling stadium. It taught us how to be cynical — and how to let go.