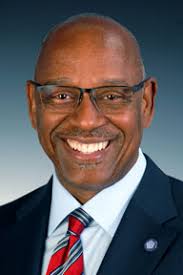 Deputy Mayor Cedric Alexander will be able to collect his pension and salary at the same time.

New York State does not allow retirees under the age of 65 to return to work and earn more than $30,000 a year unless they receive what’s known as a 211 waiver. But in June, the Rochester Civil Service Commission approved Alexander’s 211 waiver. The New York State Civil Service Commission approved the waiver at its meeting Tuesday.

In order to grant the waiver, by law the city had to show it has “undertaken extensive recruitment efforts and has determined that there are no available, qualified non-retirees.”

The state approved the application for the waiver for one year, retroactive to January 1. That’s because Alexander will be 65 in the following year and won’t need the waiver, according to a New York Civil Service Commission official who attended Tuesday’s meeting and spoke with Rochester for All.

Alexander’s salary is $146,415. According to an open records request with the state comptroller, Alexander had 5.05 years in the pension system when he retired in 2009. He had previously worked for the Rochester Police Department and Division of Criminal Justice Services. He left New York to work in Texas and Georgia before returning as Rochester’s deputy mayor in 2017.

As a member of Tier 4 pension class, Alexander is eligible to receive the average of the three years he was highest paid multiplied by 1.66 percent multiplied by his years of service. He was earning $133,437 in 2008. His expected pension is likely around $9,000 to $10,000 a year.

The New York Civil Service Commission also approved a waiver for Michael Cerretto to head the Emergency Communications Center. He will earn $122,120. He previously worked for the New York State Police and Homeland Security, and currently works for the state.

The state granted 112 waivers over the last year, according to SeeThroughNY.net. It typically grants 400 to 500 waivers a year. The use of waivers has long been controversial. Most recently, SUNY campus police unions have protested waivers granted to campus safety officials.

Records show the City of Rochester paid Alexander 31 hours of vacation time he had not earned in 2017. In addition, he wrote on his time card he was working when he was away at a conference for which he received an honorarium. Alexander changed his time cards after Rochester for All filed an open records request.

Correction: A previous version said Cerretto works for Homeland Security, but he now works for the state, per the Democrat and Chronicle.