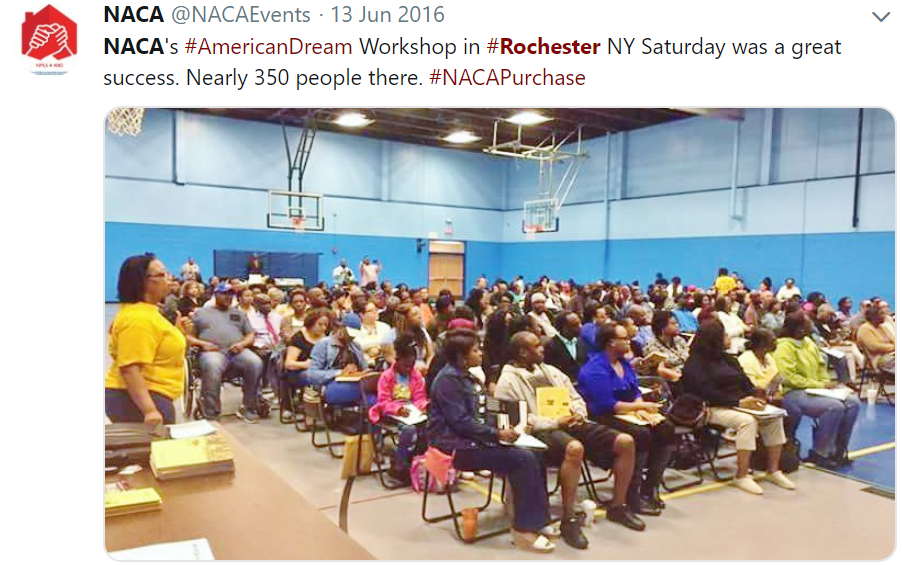 Want to buy a home with no money down, no closing costs and a low interest rate? Sound too good to be true? That’s what the Neighborhood Assistance Corporation of America promises to low-to-moderate income homebuyers, even those with bad credit.

Despite NACA’s marketing materials offering help to those who may not otherwise qualify for a mortgage, the program has no income restrictions. We found evidence the federally-funded nonprofit is helping people in the Rochester area who don’t appear to need assistance buying a home.

NACA informational events draw big crowds in communities across the country. Through partnerships with banks that want to stay on the right side of the anti-redlining Community Reinvestment Act, NACA is able to obtain 15 and 30-year fixed-rate mortgages that are typically around 4.5 percent.  Bank of America and Citibank pay NACA $3,000 for every mortgage NACA originates. NACA also receives millions of dollars in federal funds for its other housing programs, which include helping people refinance predatory loans.

Obtaining a mortgage through NACA is not easy, as applicants must undergo rigorous budget counseling. They also become “members” of NACA, paying $50 a month for between five and 10 years. Members must sign a pledge to participation in five activities a year to promote NACA’s mission.

Monroe County mortgage records show NACA has assisted 67 homebuyers since 2016. Most are first-time homebuyers. We found 17 mortgages were above the $130,000 median home price for the area. Seven were above $170,000.

One mortgage for $239,653 went to Regina Seabrook in February for a house in Henrietta. Seabrook is the president of the boards of Group 14621 and Northeast Area Development. NACA rents space from Group 14621.

A tweet from NACA congratulated Seabrook. It read, “Ms. Seabrook bought her #Rochester area home with a 1.71% fixed rate with the #NACAPurchase Program! “NACA financing allowed me to purchase more house at a lower interest rate.’”

Seabrook is also a branch manager at Visions Federal Credit Union. Seabrook has not responded to a message, marked as “received,” sent to her LinkedIn account asking whether it was appropriate for her to receive a mortgage from NACA, given her position at Group 14621 and ability to purchase an expensive house. Seabrook also didn’t return a message left for her at the credit union.

Group 14621 is headed by George Moses, who is also the chairman of the Rochester Housing Authority. RHA partners with NACA on a program that allows people to use Section 8 vouchers toward a home purchase. Moses and RHA have not responded to an inquiry about Moses’ potential conflict as the head of an agency that is the landlord for an RHA vendor.

Michael Swanson, head of the Rochester NACA office, said NACA has no financial arrangement with Group 14621 and NEAD beyond the rental agreement for office space.

The person with the largest mortgage through the local NACA program is Leonard Brock. The head of the Rochester Monroe Anti-Poverty Initiative and his wife closed on a $249,495 house in Greece in November 2016. When Brock was appointed to head RMAPI in 2015, his salary was $95,000. Brock and his wife owned a house on Lyceum St. in the city before they moved to Greece.

Brock said his wife heard about the program, then based in Buffalo, through a colleague. In an email, Brock said, “NACA doesn’t discriminate re: income and we went through every step of the program like any other family would – as advised when we drove to Buffalo to participate in the process.”

Swanson said there are no income limits for the NACA program, so Seabrook and Brock did nothing wrong. When he arrived at the Rochester office in July, however, Swanson mandated that homes must be purchased in census tracts where the median family income is at or below the metropolitan area, which is about $71,000. That policy would have disqualified both Brock and Seabrook from buying houses in their current locations.

“We’re also looking to stabilize neighborhoods. If you want to be in, you have to live by these rules,” said Swanson.

We found, however, a couple that closed on a $183,500 house in Greece in October in a census tract where the median family income Is $80,625. Swanson did not return several calls and emails requesting clarification.

Online reviews of NACA are mixed. Participants get frustrated with staff turnover, mounds of paperwork and other hurdles. Some buyers note “no money down” is misleading, because they do have to pay for some fees at closing, as noted in NACA’s client workbook.

Ashley Alexy, who purchased a home this year in Gates through NACA said the organization was transparent. She said she had a good experience buying her first house, emailing, “I would recommend the program, but with a caution that it takes a lot of self-motivation, organization, persistence, and time.”