The city’s effort this week to reboot the performing arts center project at Parcel 5 failed miserably: 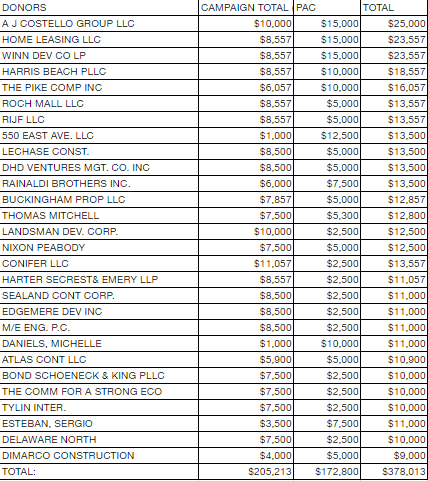 If you’re wondering why Mayor Lovely Warren is so dead set on this folly, you must follow the money. Always ask, who benefits?

We’ve previously discussed how Warren’s top 28 donors accounted for 31 percent of all of the money she raised through her campaign fund and political action committee from 726 donors during her first term. That amounts to more than $375,000. (See above chart.)

Let’s take a look at those top 28 donors and see how they benefit from what happens or doesn’t happen at Parcel 5:

Winn Development owns the Sibley Building across the street. Sibley could benefit from a shift of restaurants and nightlife to Main Street from other areas of the city, as it has vacant first floor retail.

Harris Beach, Nixon Peabody, Harter, Secrest and Emery, and Bond, Schoeneck and King often represent developers and contractors in deals with the city.

Pike Company owns the Windstream building. It could be tapped to do work on the new complex. It could also attract additional tenants.

Wilmorite (Roch Mall LLC) wants to keep a casino out of that parcel at all costs, to preserve its interest in Seneca County. Ditto for Delaware North.

Rochester International Jazz Festival (RIJF) wants to make sure its interests are protected at Parcel 5.

Christa and Morgan (550 East Ave LLC) would build the apartment piece. They also have a major stake on Main Street at the Hyatt and Rochester Riverside Hotel, which would benefit from a performing arts center. Ditto for DHD Ventures, which owns Hilton Garden Inn and several apartment buildings in the near vicinity.

Buckingham Properties owns Tower280, which is adjacent to Parcel 5.

Thomas Mitchell, a Bergmann executive, would have an interest at Parcel 5. His firm could see work on the site, as it’s done a lot of work on downtown projects. Bergmann is located in Tower280.

Labella Associates (Sergio Esteban) is already working on the project, as it did the latest renderings.

The Committee for a Strong Economy is the Rochester Chamber political action committee. The chamber’s prominent members stand to benefit from such a project. Parker is the former head of the group. Some of these members may be asked to donate to the project.

That’s 21 of the 28 top donors who stand to benefit from the current proposal at Parcel 5. A smaller, mixed use project or open space would not benefit these entities in the same way.

This project is yet another case for campaign finance reform and ending the pay-to-play culture at Rochester City Hall.