The Rochester Housing Authority has created a shadow agency, one with employees, properties and an office. But this agency, Rochester Housing Charities, will not open its books to the public. Rochester for All is preparing to sue the agency to obtain records.

The IRS signed off on Rochester Housing Charities’ creation in 2014. It’s not uncommon for housing authorities to create nonprofits, which may have more flexibility in administering projects and programs.

Several current and former RHA employees came to us with concerns about the arrangement with RHC, noting property transactions. In November 2016, the City of Rochester sold two parcels of vacant land on Diamond Place to RHC. Last year, RHA transferred nine of its properties to RHC.

One former RHA employee gave Rochester for All a $43,000 contract between a Washington, D.C. firm and RHC for workforce development and financial literacy services for RHA residents. The former employee was alarmed an out-of-town firm was retained and questioned whether services were performed.

The RHA employees said they’re in the dark about RHC’s activities. 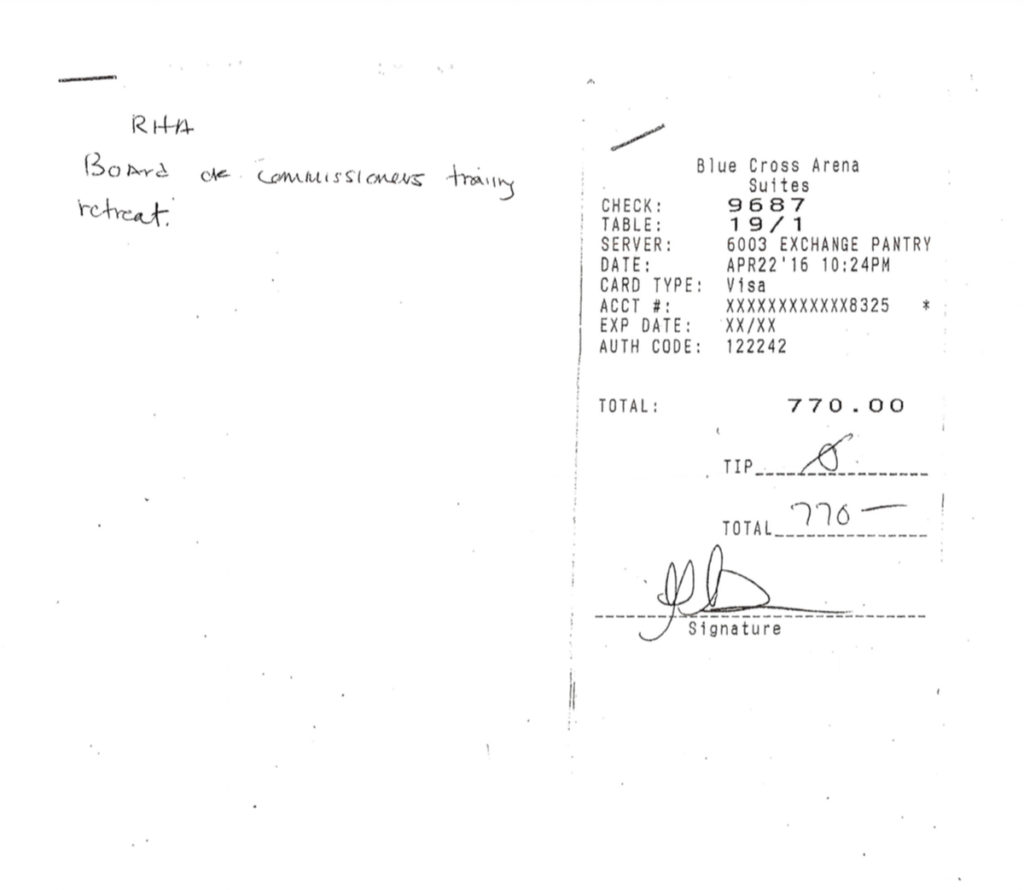 RHA Chairman George Moses was reimbursed for this receipt. Record obtained through FOIL.

If spending at RHC mirrors spending at RHA, there’s reason for concern. The group of current and former workers also alerted us to the following issues at RHA, confirmed through public records:

In an effort to learn more about RHC, we filed Freedom of Information Law requests with the Rochester Housing Authority (RHA)  to view Rochester Housing Charities (RHC) payroll and contracts, and travel and credit card receipts, and 990 forms. Our requests were denied on the basis that RHC is a private, nonprofit corporation. Our appeal, which cited case law and opinions by the New York State Committee on Open Government, was also denied.

H. Todd Bullard, an attorney at Harris Beach who does work for RHA, responded, “RHC controls its own assets, staff and management decisions. RHC does not hold itself out as an agent of the Authority and does not have any members of its board appointed by government officials.” Bullard added that RHA does not have any records pertaining to RHC, and RHC is privately-funded.

Bullard’s arguments contradict documents on file with the state. The RHC incorporation papers state RHA has the power to approve the budget and officers of RHC. They also read RHC “shall be operated exclusively for the charitable purposes of benefiting and supporting the charitable activities of the Rochester Housing Authority.” The IRS determined RHC is a Type I supporting organization under section 509(a)(3). A Type I is operated, supervised, or controlled by a parent agency.

In addition, the most recent 990 on file with the state for RHC that covers October 2015 to September 2016 was authorized by Paul Foti, the financial officer for RHA. One of the board members for RHC is John Page, who sits on the board of RHA. The 990 form says the purpose of the organization is to “benefit and support the charitable activities of Rochester Housing Authority.”

The public record makes it clear that RHA controls RHC. 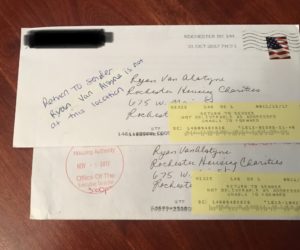 We later filed open record requests with RHC. Its 990 form lists its office at RHA headquarters. One of our envelopes was sent back marked “Return to Sender.” We found RHC’s new address by looking up a property deed. The address is in a building owned by RHA, across the street from its headquarters. Our open records to RHC went unanswered.

Case law suggests RHC is subject to open records. If a nonprofit performs agency functions, and is a wholly-owned subsidiary of a governmental entity, it has to release records. For example, volunteer fire departments have to open their books. So do nonprofits created by the state for economic development purposes.

The Committee on Open Government issued an advisory opinion on our behalf, finding RHC is subject to open records laws. The opinion reads, “To suggest that RHC, despite its not-for-profit status, is not governmental in nature or does not perform its functions solely for RHA elevates form over substance. The RHC carries out its functions for and on behalf of RHA.”

Our only recourse is to file an Article 78 in court, asking a judge to force RHA and RHC to turn over records. Rochester for All will likely pursue this remedy an ask for attorney fees.

It’s imperative that the public be able to inspect RHC records to ensure tax dollars are being spent wisely, and that low-income residents served by RHA and RHC receive good services.