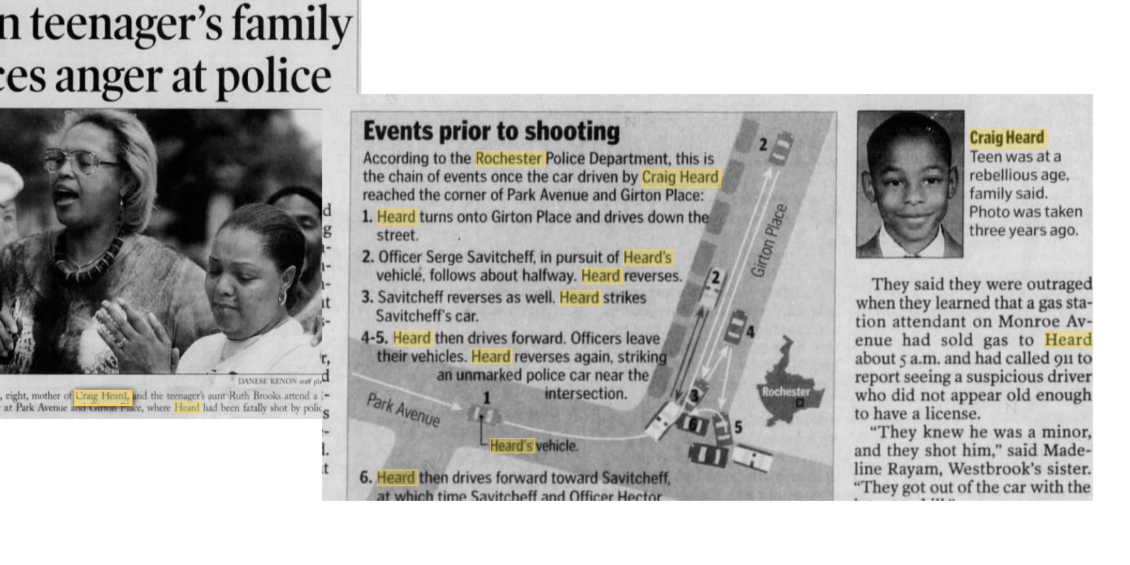 Updated with video of shooting.

It’s not okay to chase a stolen car, but it is okay to shoot at one.

The Rochester Police Department’s policies played out in last night’s shooting of a 15-year-old boy who was behind the wheel of a stolen car.

First let’s look at the general orders regarding chases and shooting at moving vehicles.

The RPD does not allow officers to initiate vehicle chases of suspects unless the suspect is wanted for extremely serious crimes. Even then, the department policy mandates officers consider everything from the weather to density of traffic and pedestrians. The “no-chase” policy is designed to mitigate risk to the officer, suspect and the public.

The RPD also does not allow officers to shoot at moving vehicles, with one exception. The policy reads, “Discharge of a firearm from or at a moving vehicle is prohibited unless the member reasonably believes that the occupant(s) of the vehicle are using or are about to use deadly physical force against the member or another person. Therefore, shooting at a fleeing vehicle that is traveling away from the member and is no longer a threat to the member or a third person is prohibited.”

Now, let’s look at what happened last night, as reported by the Democrat and Chronicle.

Police tried to pull the car over earlier in the day, but the driver fled. Police were not allowed to chase the vehicle, per department policy. When police later spotted the car, they tried to get the driver out of the car, but the car tried to drive away and then “drove forward at a high rate of speed directly towards a police officer on foot.” The officer fired five rounds before getting out of the way, grazing the 15-year-old driver.

This scenario is similar to the 2002 shooting death of 14-year-old Craig Heard. Two officers said they feared for their lives when the boy drove a stolen car toward them on a dead-end street off Park Ave. The department’s internal review found the shooting was not justified and Heard’s family received a settlement of more than $300,000.

Some departments, including New York City, forbid shooting at moving vehicles. The reason is – as with car chases – a lot can go wrong. Police can miss the target, hitting someone else. Police can hit the target and create a situation with an out of control vehicle with an incapacitated driver. Police can hit the driver and still get hit by the car. Finally, deadly force may not be necessary if the officer can get out of the way.

Vox wrote a detailed article featuring law enforcement experts about why shooting at moving vehicles isn’t a great idea. The article quoted Chuck Wexler, executive director of the Police Executive Research Forum, as saying, “You had a loss of life and officers putting themselves in danger. The typical offense — a stolen car — was a relatively minor offense. Taking someone’s life, obviously, [was] a tragedy. So (NYC police) realized, ‘We just have to put in place a strong prohibition against police officers shooting at vehicles.’”

(Obvious exceptions to the no-shoot policy include situations where terrorists are trying to run over crowds of people.)

The fact the officer last night was able to fire five rounds before getting out of the way indicates there may not have been an imminent threat. Video obtained by 13WHAM-TV raises questions about an imminent threat. (The reporter’s description doesn’t seem entirely accurate.)

Surveillance video shows a wider angle of the shooting. You can see RPD patrol cars trying to box the white car in. The driver is said to be a 15-year-old, in a stolen vehicle. You can see the car go right at an officer, who then fires his gun. @13WHAM pic.twitter.com/nPRKsAeTmN

You're looking at video from the RPD involved shooting on Jay Street. Police say a 15-year-old stole a car and then drove right at an officer. The teenager was grazed by a bullet in his lower body. The man who took this video calls it a scary sight. @13WHAM pic.twitter.com/kc3zf0Zoda

The department must conduct an internal review anytime there is use of force and an officer fires his weapon. We should ask to see the findings when the investigation is complete.

If this 15-year-old had died, we would likely have seen a lawsuit similar to the one involving Craig Heard.

Rochester was progressive on its no-chase policy. It may be time to revisit the deadly force policy as it pertains to shooting at moving vehicles. The risks to officers, suspects and the public may outweigh the rewards of catching young car thieves.