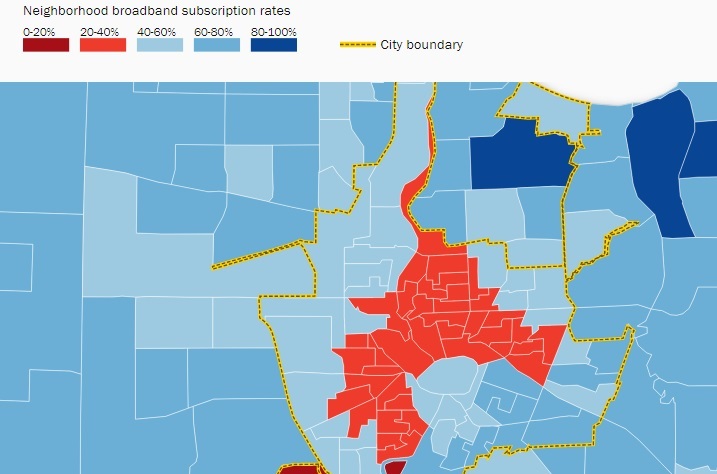 A report from the Brookings Institution maps the digital divide across the country. Lack of access to broadband is a rural problem. Lack of adoption is an urban issue. The latter problem doesn’t get much attention from elected officials and policy makers.

Neighborhood-level maps clearly illustrate digital inequality in the City of Rochester. The neighborhoods where only 20 to 40 percent of households have wireline broadband internet fill “The Crescent,” the high poverty census tracts that circle downtown. On a regional basis, 14.5 percent of the population lives in low-subscription neighborhoods, which mirrors the poverty rate.

Wireline, or fixed, broadband is important infrastructure. It’s high speed. There are no data caps. All devices can connect to the network, and tap the internet’s full potential.

Households without broadband internet may not be able to fully participate in the digital economy. Children may not be able to develop necessary digital skills and take advantage of educational opportunities. School districts serving these children are limited in providing digital curricula.

Mapping the digital divide on the neighborhood level, as Brookings has done, is important. We can see areas that need intervention. Income and education are the greatest predictors of having a broadband subscription. Barriers to adoption include price, lack of equipment and lack of knowledge about how to navigate software and the internet.

Brookings suggests localities look at ways to foster competition. In Rochester, the mayor has embraced a low-cost plan by Spectrum, which hasn’t been shown to increase adoption and has many limitations. (Warren received a donation from Spectrum’s parent company right before the mayoral primary.)

The Rochester City School District wants to utilize existing government-owned fiber networks to deploy fiber to every home at no charge. A feasibility study showed this can work. But a lack of support on the local and state levels is forcing the district to look at other alternatives, including working with the Rochester Housing Authority to set up common areas with Wifi.

It’s no coincidence our most challenged urban neighborhoods are the least connected. The digital divide exacerbates inequality. Yet it remains a low priority for local and state leaders, who are satisfied if broadband cables run through a neighborhood, even if few are actually online.